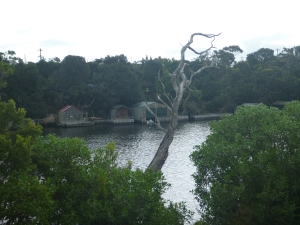 Well, this may or may not be another short post as I consume a cafe’s internet for the price of a hot chocolate – and Michael and Emma play at the playground down the road in Coonabarabran. By the by, that’s something you certainly notice on the road – our place names. No wonder the tourists are confused – i’m Australian and have no idea how to pronounce half of them! Sad really…

Nevertheless it didn’t hold us back – the first week was a beautiful blur of camping and ocean views, with the obligatory specky coastline the Great Ocean Road is known for of course.

We had not done the Great Ocean Road before. I’m so glad we decided to make it part of our trip – it really is beautiful. And there were so many postcard nooks, lookouts and towns around every corner – not just the stuff they put on the tourist maps. In fact some of the other sites we stopped at were nicer in our opinion (and less populated). For example this picturesque beach below was completely deserted! Hello lunch spot. 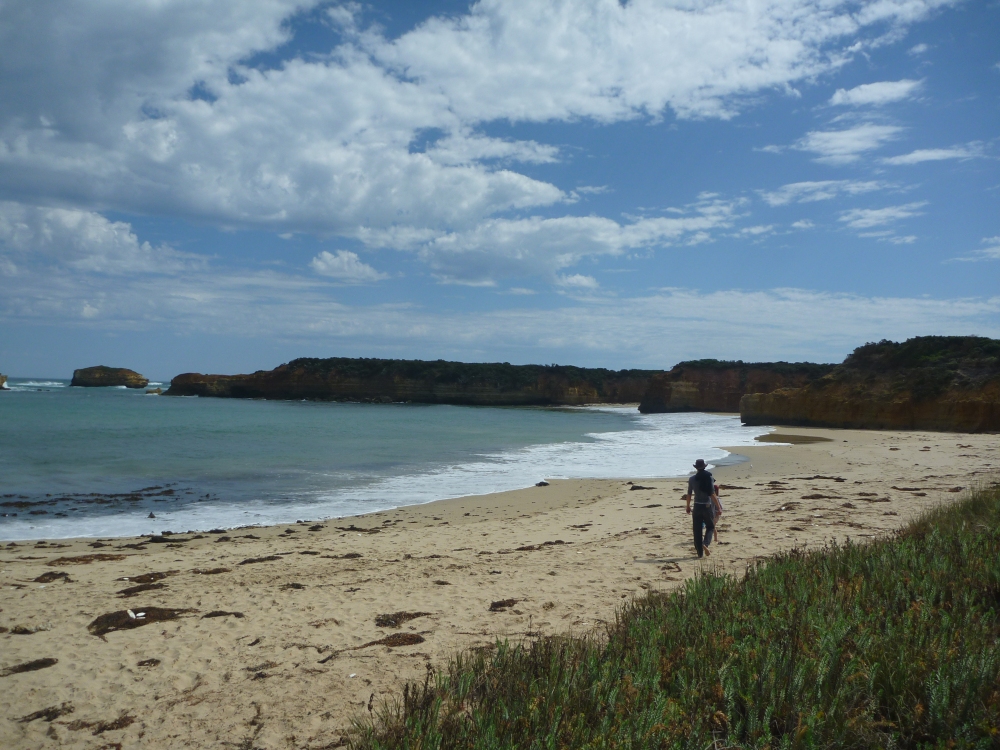 But before we even got to the ‘Road’ itself, we already had a bagful of fun. In fact when I asked Emma and Michael what their highlights were, they came from the places beforehand. Michael enjoyed cooking on the fire at our ‘rest stop’ camp just outside Beachport in SA. 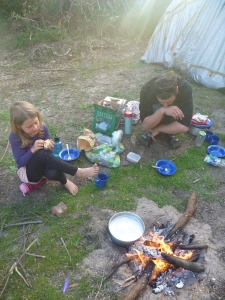 And also swimming in the Great Southern Ocean at our next camp spot, in a little vacant block abutting the bush and on the esplanade of a quiet beach. 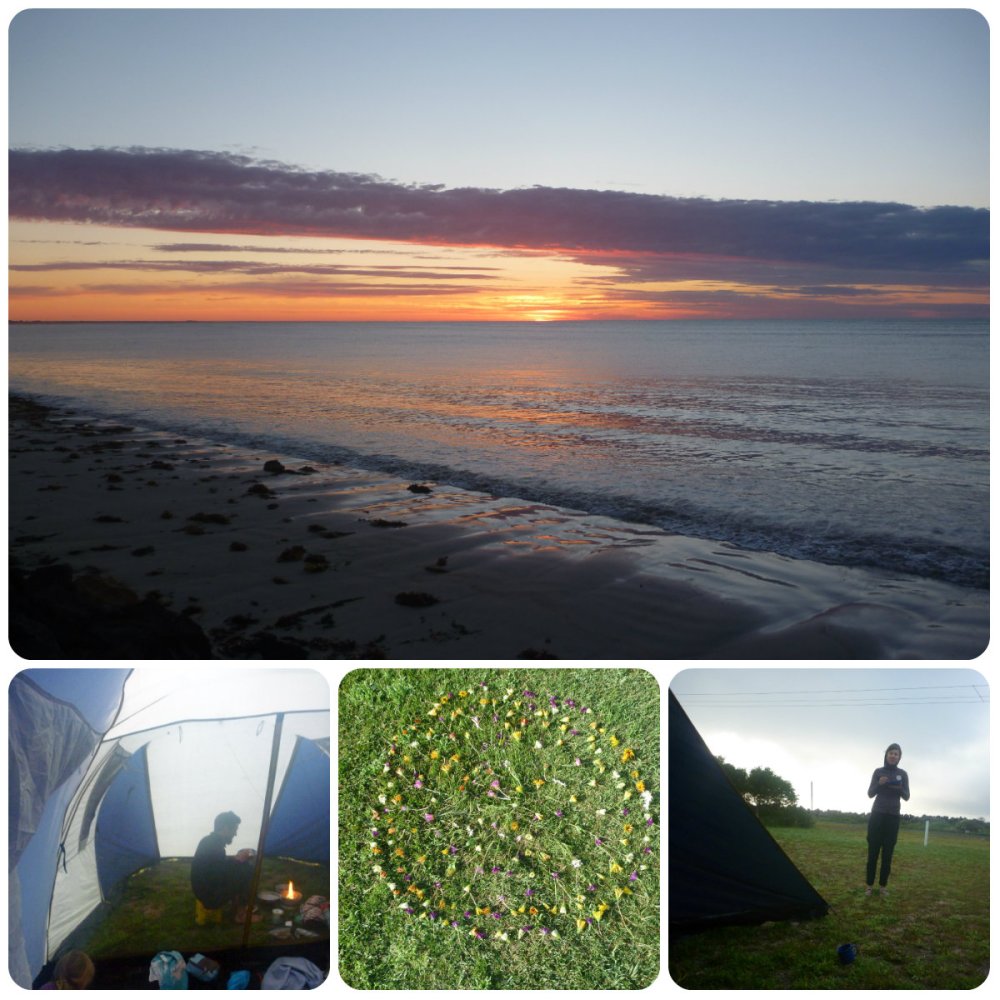 Emma’s favourite was Portland and watching all the goings on between ships, trucks and mountains of grain.

Portland, Victoria – down at the busy activity of the port foreshore. If you look carefully you will see what looks like sand is actually a monster mountain of grain and a truck (yes, a whole truck) being tipped up to pour out.

As for The Great Ocean Road itself, it was smaller than I anticipated, not that it mattered. What I found interesting was how it seemed to be a shapeshifter – moving from dairy country and sleepy little towns to drier scrub, then mountainous forest – dotted with mega tourist hot spots, surfer havens or family friendly & funky locations. What a kaleidoscope!

Port Fairy was a quaint, quiet and pretty place – would be lovely for a recharging hideaway I think. 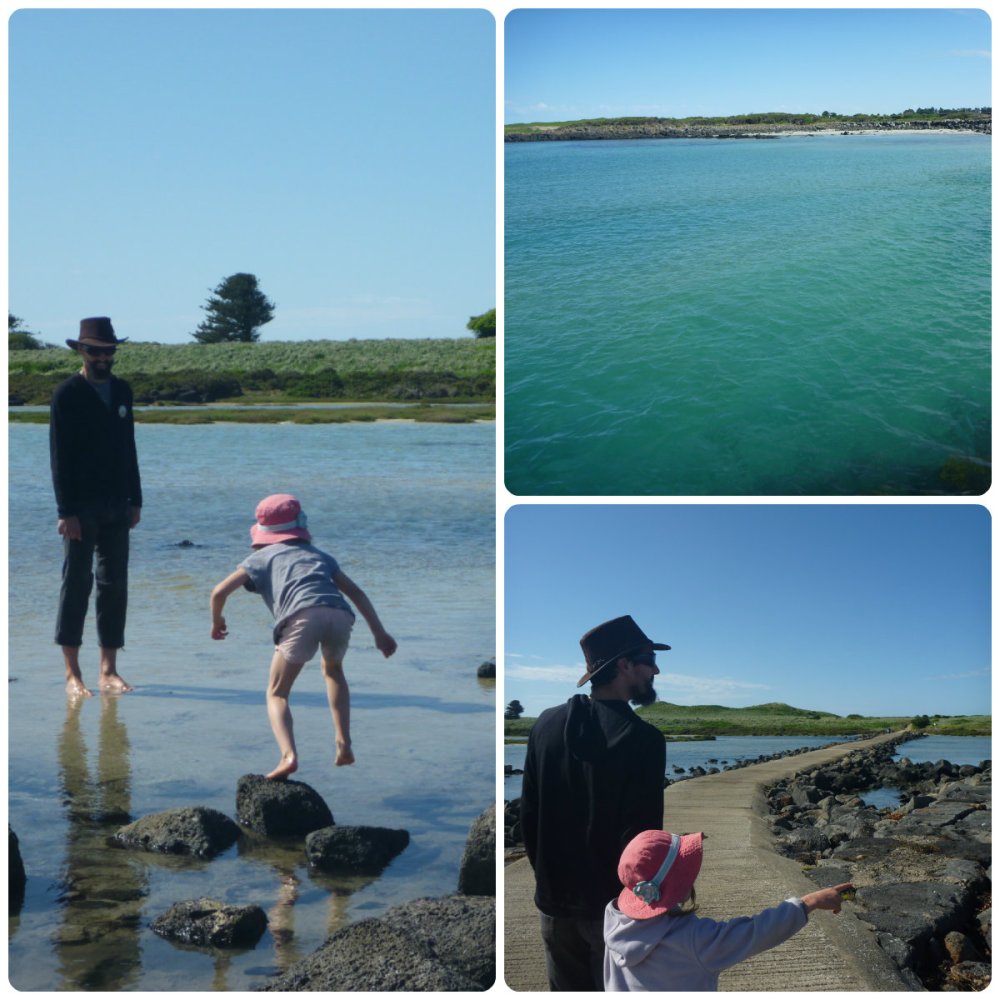 Apollo Bay was my personal favourite – we hauled up at the local Recreation Park, right on the river overlooking the range and endless farmland. Then a short stroll down the street reveals a vibrant High Street with rolling grass, playground and views to die for of the coast, ocean and range – just gorgeous. 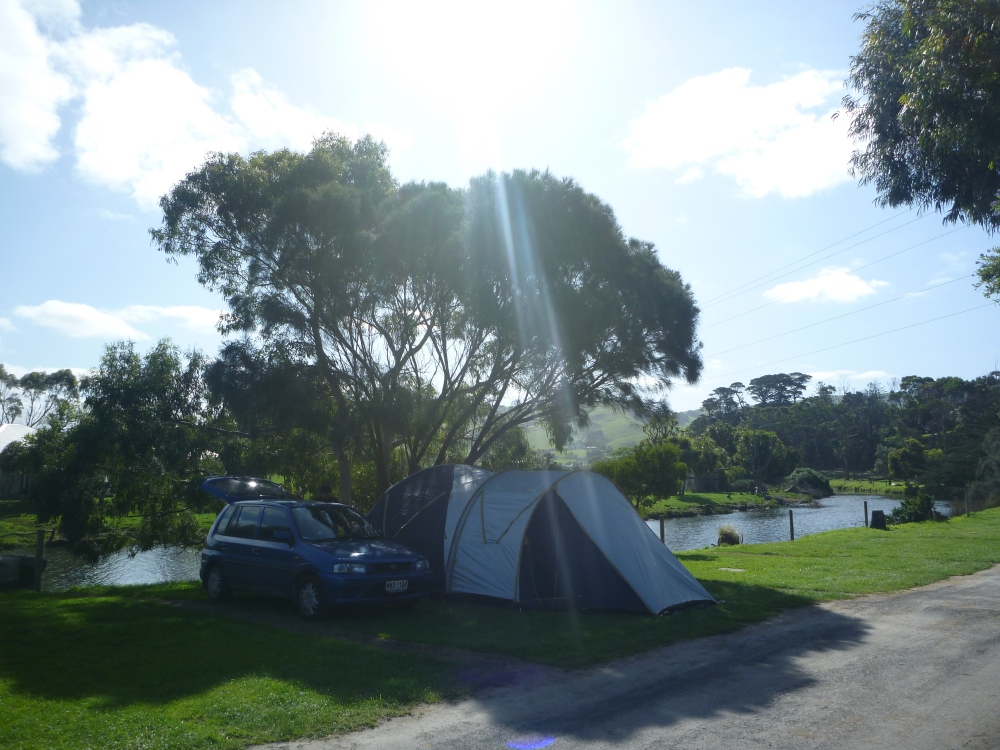 And the surprise of the trip – Cape Otway Lightstation. We thought it might be nice to visit a light house so we drove down the (rather longer than expected) road to see the touristy looking car park and frontage – ok, here we go. We needed water so we went inside anyway. Without seeing the entry fees (that should have been our first lesson) we said we would go in and Michael coughed up what turned out to be $50 for all three of us – he did a great job of not choking on his drink. But it turned out to be  a whole complex of lovely sprawling grounds with lots of interesting things to do in addition to the lighthouse (which by the way is staffed by a guide up the top so you can ask him anything you want – (I thought that was cool). There was also an aboriginal culture centre (which is actually a super cool hut) – also staffed. Dale offered to let Em throw a spear he’d made with an aid called a ‘woomera’. She loved it. Michael and I had a go too – of course Michael picked it up straight away as he usually does! And they had a beautiful map and activity book for the kids – Emma took great delight in following the map and ticking off our adventures. Talk about value for money – it was a great spot to see the ocean, take a walk and learn about history, physics, electricity, maritime navigation, aboriginal culture and a myriad of other things – including how there used to be dolphins and flamingoes living in the centre of Australia (ahem…millions of years ago in the permanent inland lakes) – that blew my mind! 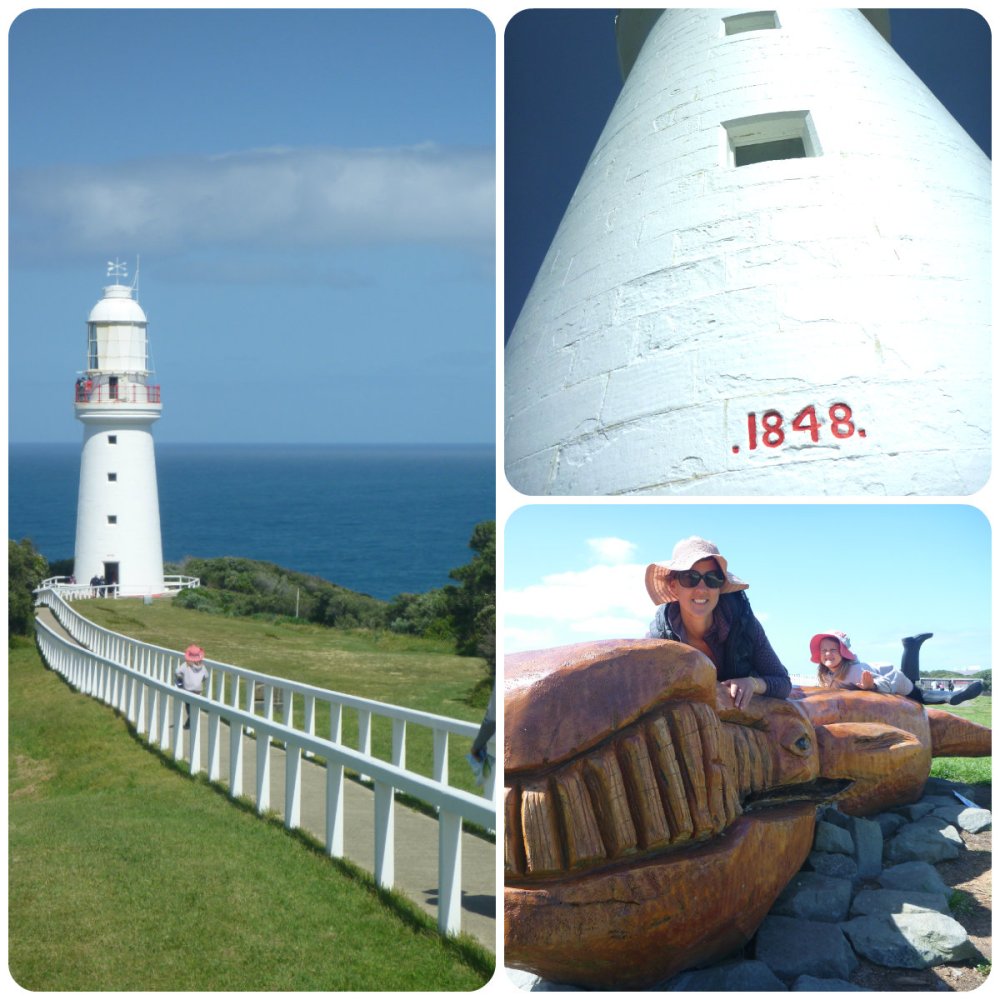 And speaking of surprises, we found out the hard way that Emma gets car sick on long, windy drives…… oh dear. Poor poppet!

So those were some of the places. There were also ‘lessons’.

What became painfully obvious to me, almost immediately after setting off, were the lessons we were being forced to learn – and quickly. You would think that after 15 years together Michael and I would probably have the whole communication thing down, right? Apparently not!

What seemed like a new phenomena for us was more likely just my amplified reactions to our situation. It was hard to believe just how immediately these things cropped up, and the ferocity of it. Up until now I have been able to avoid dealing with some of my shortcomings by escaping to another part of the house or busying myself with some other task. I no longer have that option here. My issues have been dragged out into the stark light of day by the challenge and change we put ourselves in. I don’t like seeing that side of myself – it is ugly and bitter. But, at this point in time, it is part of me – and part of why I put myself here. I knew those issues needed to be faced – so I keep choosing to do things which make me decidedly uncomfortable.

But the upside is growth, hard won strengthening growth.  And awesome, mind-opening experiences. To my amazement, Michael and I are already so much better at making plans on the run now – that’s been great!

Of course just when you think you’ve got it, something else comes along. In fact it seems to go in waves. We will do really well, then hit a hole again. I realised why – there were two lessons. We had both gotten better at communicating more effectively by being open, honest and forthcoming about what we want and what we think. The problem was the second lesson (and me) – doing it diplomatically. I hadn’t (and seemingly haven’t) figured out how to do that when i’m struggling. There’s nothing like being lost, late or constrained to make me really uncomfortable – and therefore less than pleasant to be around. What can I say – I’m a work in progress!

I love what this trip has given us already – not even two weeks in:

I love the experiences we have had, the things we have seen and the people we have met.

I love how astonished I am at the intensity of work my character is being put through, and equally by how fast we are all learning.

Boy, oh boy – what a crash course in how to be better – I love travel!

Lastly, I wanted to include this passage was that I thought was apt. It comes from a book a friend gave me to read – My Year Without Matches by Claire Dunn. In it she includes a little Rumi poem her friend sent to her:

Be ground. Be crumbled.

So wild flowers will come up

You have been stony for too many years. 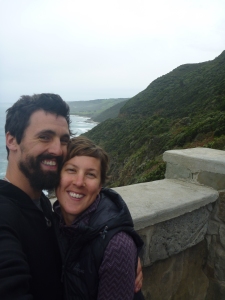