As part of the Wattlebee project, we decided to experiment with growing food in the backyard – back in 2014. This is an account of that adventure.

So we decided to grow food not just for ourselves, but for market too.

Why? you ask – well the foray into growing food for the family wasn’t yielding as bountiful a result as I would have hoped. So I thought why not try something different – approach it like an entrepreneurial market gardener (albeit a pretty casual, low key entrepreneur). I figured if it worked, then great, we might have a nice sized crop to sell and if not, at worst, there would probably be something at least for us to eat. Besides, it would be good practice! 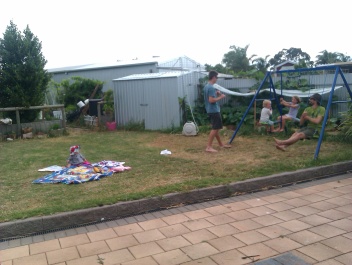 So, picture a fairly typical suburban block and backyard with lawn, paved area and the kids’ trampoline and swingset. Add in the garage (currently our home – yes,that’s right – more on that in another post), garden shed, existing shrubbery and you start to get the picture there might not be much room left for growing. In fact there wasn’t really.  Especially compared to the average market garden – or even one of the small urban farms popping up now that convert unused yards and blocks to growing plots- like SPIN farms in the US (Small Plot INtensive – google it) or  Wagtail Urban Farm right here in Adelaide (check them out – they’re doing some cool stuff).

Nevertheless, this exercise was as much about learning to think and plan like a market gardener as it was about growing the produce. So I turned the idea over in my head for a while and like so many things that manifest themselves when you need them, the name of a local kept coming up in conversation. Soon enough we met by chance and eventually discovered that she, the wonderful Jay Kimber, had just launched a local fruit and veg co-op called Produce Boxes (as well as running another venture in reusable cloth pads for ladies – LilliPads – also worth visiting). Jay was offering conventional, spray-free and organic produce with a view to encouraging and supporting more local farmers and backyard growers. It was the perfect opportunity to give this kind of thing a go on a small scale with next to no risk – if I grew good gear, I had a place to sell it and if I didn’t then Jay kept her regular order in place. Simple. And let’s not forget to mention the awesome opportunity which is being part of  a great community-building project!

So with the blessing of our friends, who own and also live on the property, I commandeered what I could and came up with 25m2 to grow in. After loosening up the soil and adding some black gold (aka compost) from Marty (the Original Green Co in Willunga, SA – 0417 822 506), figuring out the potential market was next on the list. I chatted with Jay about what kind of produce she was looking for, what sort of numbers she might buy and how much for. I pondered what I might like to grow – factoring in ease, season, local suitability and turnover time. After narrowing it down to beetroot and lettuce (plus maybe a little something else here and there), I measured and mapped out the beds and figured out, according to growing time and spacing, how much I could potentially grow. Next I plotted it out on a spreadsheet – how many seeds to sow, in which beds and when (as well as how many seedlings to raise for the next round of planting). Just going through the process of making a plan itself was worth doing.

It was a great plan. Pity it didn’t all pan out!

No, that’s not entirely true, some of it did and some of it unravelled a little – mostly due to my inexperience and inherently flawed human traits like forgetfulness or distraction. Things like figuring out what kind of watering system to use plus when and how much, not thinning seedlings effectively and not accounting for different soil or sunlight in different beds resulted in some stunted growth and longer than expected growing times. Plus, figuring out how best to use your space takes practice and time – I didn’t end up using all of the 25m2 available and, in hindsight, what did get used could have been done more efficiently.

one of the micro market garden beds – cleared and composted 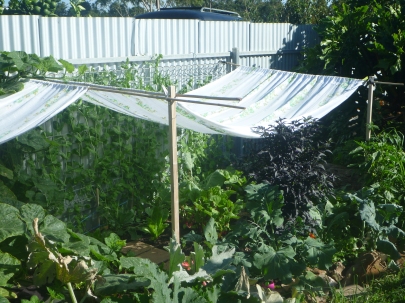 a little while later…

zooming in – can see lettuce and beets for market

I don’t consider it a failure though – far from it really. Despite the lack of marketable produce, there were so many good things that came from trying this – like learning the importance of good soil first hand. The critical nature of soil is referenced all the time – and rightly so because it is absolutely true. But there’s nothing like really seeing and feeling it for yourself. That is why I love learning in the garden – it’s different, almost like we absorb it through our skin. Some of those lessons really stay with you – sometimes without noticing. Like the first time you see random seedlings come up in a patch and realise you know what they are – despite the minuscule 3cm height and standard colour of green, something inside recognises the deceptively simple shape and screams “I know what that is! I know what that is!”. I love that.

the custom seed trolley – fashioned from an abandoned BBQ, portable wardrobe, some bamboo, poly pipe and an old sheet 🙂

But you see I digress. Moving on, this experiment also upped my seed raising skills. In the few recent years that I have turned my hand to gardening, I’ve been a bit hit and miss at this aspect of it, particularly with plants like celery (just you try and control those weeny, finicky seeds). But, this season I finally managed to grow healthy seedlings, and more consistently too – even that nightmare celery (yeah – high five!). I put it down to consistent practice and attention – if we continue to do something over and over, naturally we improve. 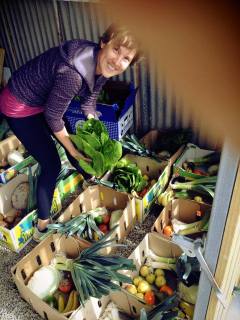 Another fantastic positive was actually getting to harvest and sell some produce. Aside from it being fun and exciting to share your efforts, just wrapping my head around that whole activity was extremely useful. Thinking about logistics is something I do better if I can actually go through the process. In the end, we managed three (charmingly small) harvests for Produce Boxes including celery, lettuce, beets and chillies. Importantly though, just being involved was so encouraging because people really seem to be getting excited about good healthy food – it’s awesome! The sooner we connect with our food, the sooner we connect with everything else. So a big thanks to Jay and all her customers for the opportunity and response to our little contribution! 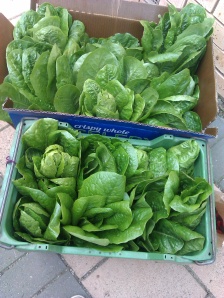 … to this, packed up and ready to go.

And, as anticipated, we did end up with more food to eat ourselves. We have been able to eat salad and veggies from the garden most days over the past few months. It may not have been enough to feed us completely but it was a feat we haven’t achieved before. Onwards and upwards! I think as a result, I would apply this kind of method to our next home garden – i.e. using a planting plan, staggered seed raising, successional planting and building in lots of contingencies (i.e. triple everything!). I suspect a lot of home gardeners are probably on the ball with this kind of thing already but I have to say I certainly wasn’t! And thinking about it overall, the available space could have be used more efficiently to produce even more food than we did in this instance.

So we are packing up the garden now, in anticipation for winter and our need to focus on upcoming travel plans (I’ll chat about this in another place on the website soon). All in all, I’m pretty pleased with the outcome and lessons encountered! Mostly though, I hope it makes you think about the possibilities – it doesn’t take as much space, or know-how, as you might think to grow yourself some food. Just need to get in there and try! If you pay attention, nature will show you the way. And you might even grow enough to sell or swap locally – sweet deal I say!

Wishing you warmth through winter!