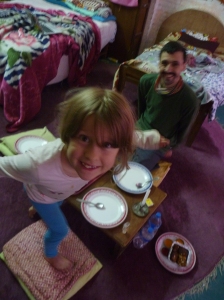 While our blog is still galavanting around the USA’s West Coast, we in fact, have already travelled on to the East Coast, India and Nepal. But more to the point, (for those who don’t know), we find ourselves back home again in Australia – months ahead of when it should have been and under unexpected circumstances.

So in an attempt to digest it all, I thought it worthwhile to interrupt the chronological order of things and bring it up here and now. This is how it happened…

Part One: Michael and Emma.

Our plan was to travel for a year. At the six month mark, in the throes of trying to volunteer in Nepal, Michael came to me and said he was ready to go home and take Emma with him. Whoa, I was dumbfounded. But I shouldn’t have been so surprised, I knew we were having a hard time – we were tired, grumpy and had worn down the buffers of patience and understanding. We struggled to replenish ourselves and the homesickness that Emma had carried throughout the trip wasn’t waning, it was gaining ground. I guess I just figured we would keep going and eventually push through it – I mean, we had seen so many of those hard times already during our six months. Most of them had laboured forth priceless lessons and growth.

But as is one of his strengths, Michael could see it was time to let go – we had gotten to the stage where the downsides of this travelling were no longer healthy for us as a family, or for Michael and Emma as individuals. He has always been better at making the move to leave something when it seemed impossibly hard. And there was no trace of desperation or frustration – just his calm manner and evident consideration. So despite my shock, I knew it was best and there was nothing for it but acceptance. It was time for them to return to the safety, structure and relationships of home to begin the next chapter, implementing the outcomes of their experience. I understood and supported that without question.

It was the implications I was struggling to grapple with. Because while I knew they must return home, I also knew I couldn’t. I wasn’t ready to.

I still had so much work I wanted to do within myself. We had talked about it extensively and thus already had plans in place for me to stay on after our travels for some alone sabbatical time. It was to be a chance to really sit with myself and find out all the things I either didn’t know or had been avoiding. After all, as Michael pointed out to me, I had grown up with my family and moved straight into a serious relationship with him at age 17, followed by study, work and a family – I had never really been alone in my whole life. (now there’s a scary realisation….)’

So we had both seen this as a great opportunity for me to work on some of those things I skipped as an adolescent. But now, in the current scenario with Michael and Emma leaving, and me feeling like I must still take that opportunity, it left me dizzy with one question – what on Earth do I do now? I was having a hard time facing what it meant. We have to be apart, for a long time. I must do a whole bunch of challenging stuff on my own. And we’re doing it now. Oh boy.

So the plans had changed. Again. In a big way.

Over the next day or so I processed the new situation and Michael and I talked about how we might proceed. I decided I could and would stay on in Nepal – seeing out some of our volunteering commitments then moving onto sabbatical stuff. Michael and Emma would leave in two weeks, giving us a chance to spend some more family time together and do a few more local explorations. We booked flights out for them on April 15 and contemplated the reality of what had transpired.

The next couple of weeks were a confusing mix of lovely family holiday, overwhelmed-induced paralysis and irritated twiddle-thumb waiting. We each had times of struggling, joy or becoming impatient to move on. I do believe that all of us were also grateful –  we spent those last days together exploring the wonders of Kathmandu’s old cities and the quiet peacefulness of Nargakot’s elevated village views. Towards the end we all became nervy and on edge about the impending farewell. But eventually it gave way to the most wonderful of family days: the day of departure included cuddles, stories and breakfast in bed followed by a happy productive air of just generally getting on with it.

Interestingly, minutes before he was due, our previously faithful and frequently used taxi man rang to say he wasn’t coming. Okay then. Luckily taxis were not a rare commodity and so we made our way to the airport unperturbed. The nerves returned though and only grew as we tried to sit for a cup of chai together, realising two things: 1) this dinky little outdoor alcove with a couple of small stalls and grand total of 4 chairs was it in terms of a waiting or farewell area, and 2) it was probably time for them to go already anyway. It was incredibly hard and heart wrenching to say goodbye. Luckily we tempered it well with lots of hugs and kisses, smiles and cry-laughs. I waved until they disappeared into the ‘ticket-holders only’ area then attempted to find a bus home…

So that’s how Michael and Emma ended up back in Australia with me still in Nepal! I’ll wade through my own return shortly in a second part – until then…xx