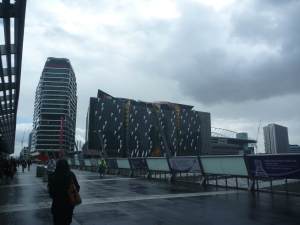 Our next stop was Melbourne (or Mel-bin if your aussie, as someone recently depicted our pronunciation). After realising last minute, that we have family there, Michael put a call in to his cousin to see if they might have us for a few days. They very kindly said yes. It was wonderful to get to know them better, sharing dinners and impromptu conversations, as well as the everyday house and family-rearing duties (they have three young girls – a total of four girls in the house made for lots of fun, noise and antics!). Emma even got to spend a morning in school with one of her cousins, which she was most chuffed about.

It’s a real priviledge to be able to step back and see how another family does things. So thank you very much to the Braun clan! It was one of those unplanned experiences that turned out to be really enriching.

Our first Mel-bin destination was The School of Life. As you might have seen, I jumped the gun on this one chronologically and posted it a few days ago. It was a fantastic place, doing fantastic things – if you missed the post you can see it here. I highly recommend taking a squiz at their site. It felt really great to be in the city – pity we didn’t have more time to just explore. We did have time to squeeze in a quick visit to a little shop around the corner though – a place doing Japanese soups and salads, but with organic ingredients. It was really heartening to see what seemed to be a trend (we saw it at this place, an indian restaurant and bakery in the space of a day) – your usual kind of establishments doing a typical menu, but using organic (or in some cases bio-dynamic) as standard. In fact, while I was pfaffing around at home getting ready to go to the city, Michael wandered down the street and found an awesome organic grocer! As it turned out, Chris at Green Onions ended up supplying us with more than just fruit and veg – but i’ll get to that in our next post… Meanwhile, check out Michael’s description of Green Onions organic grocer  here.

By the way, we have decided to list the cool places we visit in a kind of quasi-directory/review list – under “Good Stuff” on our menu. So have a look 🙂

The following day we got off to a cracking start – out of the house by 7am! Our mission was to visit a little organic bakery mic had found for breakfast, followed by the Ceres Environment Park.

The bakery, called Loafer Bread, was pretty darn cute – they even had their own delivery bike!

More impressive though, was their menu and the ingredients they used. Not only did they use organic where possible, they also only sourced meat from farms they had some kind of direct contact and trust with – Andrea (the owner) ordering from the farmers themselves, who delight in updating her on how the season is going and what she might expect from their product. Now that’s knowing where your food is coming from! And Bio-dynamic milk was used as standard in every coffee – great to see products farming with ‘beyond organic’ methods becoming more common (the whole organic VS bio-dynamics VS every other method out there debate is something we’ll likely look at down the track. In the  meantime, I encourage you to do your own learning – find out how your food is grown!). While Andrea described it as more difficult to balance the extra cost of doing things that way, the customers and relationships built with them made it possible. Indeed it’s that ‘people’ aspect which seems to drive the businesses/projects/people we have spoken to so far, to forge ahead through challenge and make things work. So, in addition to our native Home Grain Bakery, we have added this to our mental list of great bakeries to patron. You can see more about loafer on our ‘good stuff’ page here (once written!).

After filling up on Loafer’s delightful breakfast menu (including house-made granola, bircher muesli and stewed rhubarb), and taking some more traditional bakery items with us for later, we headed to Ceres.

The title Ceres Environment Park is another all-encompassing label to try and bundle in many sorts of awesome initiatives happening out of the one place. In this case, Ceres is an educational hub set on 4 acres of rehabilitated land – a former rubbish dump which has been resurrected to host community and market gardens, children’s playspace, a village green, organic market, cafe, nursery and numerous educational spaces (a global village and teaching centre, an alternative energy demonstration park and areas for local classes & workshops). There’s a lot going on! Read about it on their site here.

They are also kicking off a ‘fair food’ movement, encouraging people to get to know the source of their food and their farmers, cemented by their supply of organic fruit and veg in a ‘seasonal food box’ type of offering – details here.

It seemed the history and creation of Ceres reflected a down time in the area and community, which highlighted a common equation I’m seeing:

then, if a dedicated group of local volunteers exists you get continued action + word of mouth = organic growth

add partnering with other groups, grants or networks = more growth and impact in the community

What happens after this, isn’t so clear to me thus far – but extremely important. I’m keen to see how the momentum and health of an initiative is maintained. Hopefully that too, will reveal itself.