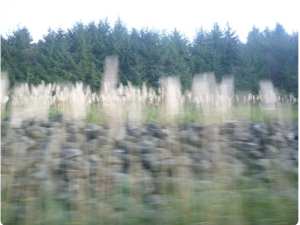 Today was the day to pick up our rental car so we bussed into downtown San Fran – bang on the right stop this time, woo! We were early and so took a walk down to the Ferry Building area. It was a bustling little place with the beautiful and historic Ferry Building itself, the nearby piers and trolley cars coming and going. There were also vendors setting up lots of stalls with tourist trinkety plus some decent photography.

We also saw many homeless here – not unlike the rest of San Fran – it is very visible. It proved a good conversation starter though for the issue which Emma took in – I think perhaps realising for the first time that not all people have a house to sleep in.

After some more wandering we found the car hire office. We had booked it earlier in the year, while still in Australia. Initially it was looking to be a horrendously expensive exercise once you added milage and insurance to the price tags. We also investigated the “car moving” companies who get paid to move cars for dealers or the wealthy retired population that migrate south to Florida each winter. Seems like an ok deal for a traveller, very economical but you do give up some freedom in how long you can meander for.

Luckily for us we eventually came across a couple of sites set up specifically for renting cars to foreigners. They act as a third party, offering deals on behalf of most providers and usually all the requirements are included – i.e. our’s included unlimited milage, all insurances and no fee for pick up at a ‘special’ place (like the airport). For some unknown reason, this ‘all-inclusive’ option for tourists is way cheaper than booking directly. So with all the fine print and finances agreed upon, we took the deal. When we got there it was as easy as present your printed third party voucher, sign the register and “here are your keys” – sweet!

And even sweeter was the unexpectedly fancy-pants example of a car we got – a minivan type vehicle: the Chrysler Town & Country. It was bright shiny new in flashy red with electric everything – windows, sliding doors and seats. It had fold-flat-in-the-floor capable seats and cup holders everywhere. Oh, and even usb and standard electrical outlet charging points – we could charge our phone and computer on the road. Whoa – it was all a bit much for us budget travellers to take in. It sure was appreciated though, particularly the flexibility and comfort as we were using this for part-time accommodation.

We discovered a Whole Foods Market was nearby (a very large organic/fair trade supermarket chain all over the US). We stopped in to stock up for the drive – and got lost in the world that is Whole. After the lengthy diversion we set off, dropping Michael in the absolute deep end of driving on the wrong side of the road amongst downtown traffic of a busy US city. But, as with most things, he took it in his stride and did a fantastic job.

Contrary to our map’s suggestion, we opted to exit the city via the Golden Gate Bridge – how could we not? It took us past the pier district which was alive and interesting. We could tell we were getting closer to the bridge by the proportionate increase in traffic congestion. But before long, there it was – a stunning red icon to drive along. While we missed out on a car park to stop and admire it better, driving through it was a picture to remember.

Now, we looked forward to some country driving en route to California’s famous elderly – the giant trees in the Redwood State and National Parks.