As the title indicates, this is both a welcome and farewell. Hmmm, that’s odd you say – I shall explain……

This is our first ever post – hurrah! And thus, welcome to our blog!

We plan to use this section of our site to cover everyday happenings and info that seems relevant as we take on our new life.

It is also a talented little creature because it will morph before your very eyes, into a…… travel blog! Yup – that’s because, (for those who don’t already know – which is potentially very few, given these plans have been in the pipeline for over a year now!), we will be departing for a year long trip away. Woo-hoo! Hence the ‘farewell’ – but not until October 🙂

The decision to go away for a year was originally born out of a desire to do something and make a difference. It was at a time that we were kind of ‘waking up’ to the type of life we were living (as I explain in more detail here in our ‘Living Small’ article). I think we felt stuck and wanted to shake things off – do something positive. It seemed we could make more of a difference with our efforts in another country where life isn’t so gifted as here in Australia – so that the small offering we were able to make could be of bigger impact. Couple this with a wish to experience simpler cultures and Michael’s lifelong interest in the Himalaya, and suddenly the possible destinations became clearer. Our first thought was Pakistan (one of the villages in Kashmir actually). However, much to the relief of many family members, we decided we could probably reduce the safety risks and still meet our aspirations by going to Nepal instead. Did I mention that we are bringing our seven year old daughter with us? Then, with India so close by, it seemed a good idea to include it too – what an opportunity to see life in all it’s loud and colourful glory, as well as its despair. And we thought we would also take the opportunity to visit my mum who lives in the USA. So that became the plan.

Over the 14 months since the plan was initially hatched, it has seen some transformation. And I have to say I am sad for that in a way because the volunteering, which first set us on this path, had its spotlight shifted somewhat to also include opportunities for researching and seeing first-hand so many of the things we want to learn about – like intentional communities, tiny/small living and the myriad of different farming/growing techniques around. We still plan, as before, to volunteer in Nepal but we will also be using our time abroad to see the hotbed of activity going on in these areas. Don’t get me wrong, there is a bunch of stuff to see here in Oz too – its heartening to see just how much is happening. We plan to take some of it in as we drive up the East Coast to visit my dad on our way out! That said though, the more we look at what we want to learn – the more we realise we can do so in the countries we’ll be visiting. And so it shall be. In fact, Michael aptly likened this transition to a little quote that I not so long ago read, and consequently put up on our wall: 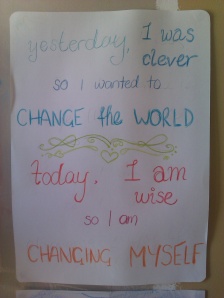 It must be said that I have had some doubts cross my mind – like, it’s a really expensive thing to do – is it worth it? Would the money be better spent setting up our own place here? Or just donating it to someone else directly? Those are all valid questions, but in the end, it feels like this trip is just something we have to do – you know that feeling? You might not be able to rationalise it, or explain it enough for others to understand – but you know it is on your path. It seems this is a learning and life opportunity not to be missed for us. Its taking shape as a trip to inform and guide our future ambitions – I think these experiences will help us decide specifically what we want to pursue when we return.

As an aside, I have been struggling with what to call this ‘trip’ – largely because there are so many aspects to it – research, volunteering, sight seeing, family visits, mind expansion!. We have referred to it as a ‘holiday’, which just seemed a poor description really, given that it won’t be your average kind of holiday  and we aren’t planning to be typical tourists (although we are totally reserving the right to still do some touristy things that take our fancy!). We will however, be leaving behind daily life and sharing some wonderful experiences as a family, so I guess it’s a holiday in that respect. This ‘family’ aspect is a point I want to touch on and say that for us, bringing our daughter Emma to take part in the experiences is critical – it was another major reason for doing this trip. We want Emma to know that not everyone lives as we do, there are many ways to do things and that happiness is not equated with ‘stuff’. Having been lucky enough myself to briefly visit a few countries to see my dad when I was younger, I know just how much seeing these places affected me. There is nothing quite like seeing another culture for yourself. I remember it feeling, literally, like another world. For that, I am very grateful. What better way to open your mind, build understanding and tolerance and become a better person?

So if you have a more apt description for this adventure, perhaps you could suggest it in a comment below!

In the meantime, here is the itinerary as it currently stands:

We would like to put the word out about where we are going and hear what others think would be good to see/places to go/people to meet – if you have such wisdom, please let us know! If not, please spread this around in any relevant circles 🙂

Until then, as Michael would say, enjoy today!